Later in March I will be working with Bespoke Access Awards to look at what good access in a hotel room should look like. This international competition to design fully accessible (and design-led) hotel rooms, something that happens very little within the hospitality industry. 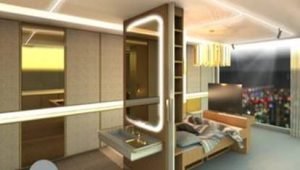 Robin Sheppard, Founder of Bespoke Hotels (the UK’s largest independent hotel group, with 9,500 hotel rooms) found himself paralysed in 2003, suddenly having to use accessible rooms at hotels. He quickly realised this was an area that the hospitality industry was really behind in – accessible rooms were often not fully accessible, hard to get to and joyless. More than 12 Million people affected with disability in the UK face poor access to Hotels, Restaurants, Bars and Club.

Why should disabled people have a sub-par experience? Robin has now almost fully recovered, however he saw this as an opportunity to make real change in the industry and launched the Bespoke Access Awards, which are now in their second year. There is a prize fund of £30k and is in partnership with RIBA. Robin has been named Hotel Sector Champion by the government’s Office for Disability Issues.

The Bespoke Access Awards stand as a unique international competition to design fully accessible hotel rooms, as well as to continue improving access to properties worldwide for disabled people, including those with learning difficulties. The first such design competition within the industry, the awards aim to celebrate inclusive design and inspire accessible solutions across all areas of hotels, with a total prize fund of £30,000 on offer for the winners. awards ceremony at the House of Lords on the 18th April 2018 !

A nice song for the weekend I think!! Ross goes to the House of Lords !!
Scroll to top